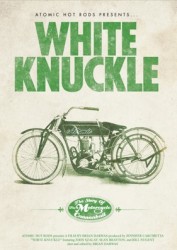 What could possibly go wrong? Let’s spend 3 weeks riding cross-country on bikes built before 1916. Should be no sweat…

Brian Darwas of Atomic Hot Rods has produced a movie about a group of talented bike builders rebuilding there classic bikes across the country – while riding.

“I followed some friends as they rode on the first Motorcycle Cannonball. The run was all pre-1916 motorcycles. Some were single cylinder engines, some had no transmissions (just a belt and a tensioner). They started in Kitty Hawk, North Carolina. . . and rode clear across the country to Santa Monica, California. Literally “Coast to Coast”, on all secondary roads, no highways! . . and since I like to witness pain and suffering I tagged along and made a movie about the trip.” – Brian Darwas