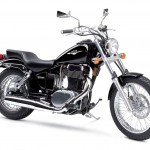 Dexter Ford and The New York Times, take a look at California based, Ryca Motors. Ryca specializes in conversion kits for the Suzuki S40, turning the Harley Davidson Sportster 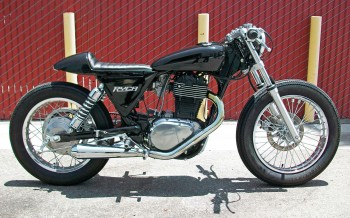 “wanna-be” into a do-it-yourself cafe bike.

Consider it Fisher-Price’s “My First Garage Bike” or adult LEGOs, that you can build into any variation you want – Cafe, Scrambler or Street Tracker.

The kits start around $2500, plus the original donor bike – or you can have Ryca build everything from a brand-new bike for around $9500.

From: The New York Times

Their company, Ryca Motors of Whittier, Calif., has intervened on behalf of the cruiser-style S40, producing a parts kit that rescues the bike from its usual role as a none-too-attractive Harley-Davidson Sportster replica and gives it the identity of a classic cafe racer.

When the transformation is complete, the bike’s spare lines echo those of single-cylinder machines from the likes of BSA and Norton, popular in the 1960s among enthusiasts who stripped them to the basics and raced one another over country lanes between British roadhouses. That cafe-racer style — signified by low-mounted handlebars, footpegs repositioned to the rear and barely muffled exhaust pipes — eventually grew into a trend.

Jay Leno even highlighted these guys in his “Jay Leno’s Garage” segments.