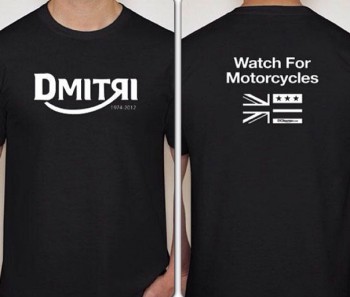 We lost Dmitri Medvedev almost a year ago in a senseless motorcycle accident caused by an inattentive driver. Back in Septebember, 74 year old Alphonso Hawkins took a left turn in front of Dmitri’s bike on US Rt 50. Smart maneuvering by Dmitri allowed him to save the life of his fiancee, Cassie, but not his own.

It was a stupid accident that should never have happened. All  Hawkins had to do was pause – take a second look – and WATCH FOR MOTORCYCLES.

In honor of Dmitri – and because May is Motorcycle Awareness Month – we’re doing a limited run of memorial t-shirts. Dmitri’s “logo” (based on Triumph that he loved so much) on the front and WATCH FOR MOTORCYCLES on the back. Available in black on American Apparel shirts in LARGE and XL.

Pre-order yours in our STORE.