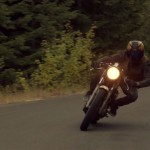 As a kid, I was fascinated by my mothers Yashica Twin Lens Reflex. Still photography was the coolest, but when I watched the fluid image reflected and reversed on the mirrored viewfinder, I was hooked on the moving image. I love the movement of waves; the flicker of fire; and the flight of birds. Maybe that’s why I love riding so much.

My love of motion pictures led me to a career behind a news camera, but lately I’ve been inspired by some well produced motorcycle videos. A link from the guys at Iron & Air brought me to a interactive video project by The Instrument, a creative agency in Portland.

The Build Film from Instrument on Vimeo.

The stories are constantly building up – and much like life, never fully finish. You’re left wanting to know more – and that’s a good thing.

Half the fun is watching the behind the scenes. This was not a guerrilla-style marketing piece. Some heavy machinery was used to capture the visuals,  because as the off-camera crew says, “GoPro’s are for pussies.”

My hats off to the film makers and the builders. Nice to see something that encapsulates two of my loves…

The Build – Behind the Scenes from Instrument on Vimeo.