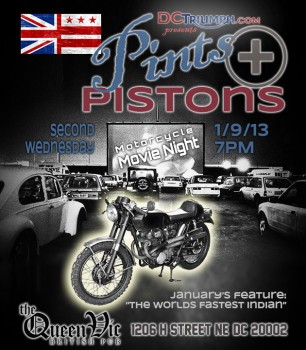 Let’s meet-up for another movie night at The Queen Vic. This time we’re going more mainstream with the 2005 theatrical release of The World’s Fastest Indian.

In the late 1960’s, after a lifetime of perfecting his classic INDIAN MOTORCYCLE, Burt sets off from the bottom of the world, Invercargill, New Zealand, to clock his bike at the Bonneville Salt Flats in Utah. With all odds against him, Burt puts his irrepressible “kiwi” spirit to the test, braving the New World on a shoestring budget. Burt’s quest culminates in an unlikely conclusion and remains legendary within the motorcycle community to this day.

See you Wednesday night at 7pm on the 2nd floor “back porch theatre” for DC Triumph Pints + Pistons.