The International Motorcycle Show always falls on an odd weekend in DC. It’s right after new years, everyone is fried from the holidays, and it’s COLD. Having a riding cut-off of 40 degrees, Saturday’s 20-something temps meant four wheels instead of two.

They moved the show into a different section of the convention center this year, and because of that the show filled up the room a bit more. There weren’t more booths and exhibitors, but if felt like there were. Actually, the show was missing some of the Vintage motorcycle groups that we’ve grown to love at IMS. 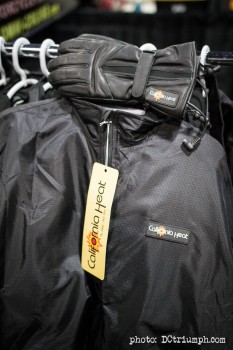 e checked out the Triumph booth, with a few nicely painted Bonnevilles and Thruxtons, along with the newly designed Tiger 800.

Did a scout at the Ducati Scrambler display and drooled at some of the BMW’s like the Nine-T. 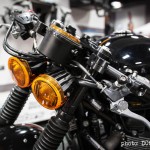 Dug the Twisted Throttle demo bike and investigated a random add-on that turned out to simply be a horn.

Tried on the some helmets, and investigated some other riding gear. I liked the heated gear from California Heat. I spoke with the developer who used to work with some of the biggest names in heated gear (Think, Gerbing). Their stuff is totally compatible with Gerbing and looks to be more cost effective. They look innovative and keep trying new ways to keep you warm.

I wish I had the gear for the walk to Right Proper Brewing, but the beer menu there kept us warm and dry once we arrived.

We helped fill the place to capacity – hopefully, no one was kept from joining us. Robin Schmid came out to join us for the first time in a while – and took “photojournalism” duties. Check out her party shots below.

Thanks to everyone who came out. We’ll do it again, very soon!