[Editor’s Note: Our friend Casandra is taking it to the Capital… Richmond that is. Here’s her account of a recent lobbying day at the Virginia State House. Casandra can be reached at casandra.strafer@yahoo.com] 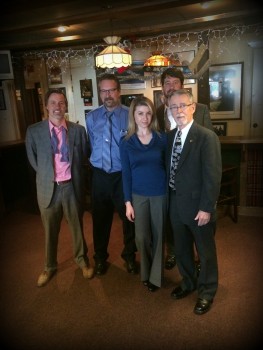 RICHMOND, Va.- It’s slightly after lunch time when I arrive to the pre-game informational session at the Holiday Inn located west of the city’s historic fan district. It’s Motorcycle Lobby Day. The room is packed with roundtables and happy faces. Thankfully, I grabbed a seat toward the front. There were the usual heavy hitters from ABATE & VABA present, however there were a lot of first timers as well. This marks my second year participating in the VA Motorcycle Lobby Day, hosted by the Virginia Coalition of Motorcyclists. The informational session is designed to equip the attendees with the knowledge necessary to lobby delegates and senators at the General Assembly the following day. Many bills of interests for motorcyclists were discussed. This year at the legislative roundtable in August VCOM decided to introduce a bill of its own which is being carried by Delegate Tony Wilt.

HB1700 approves auxiliary lighting on motorcycles increasing night time visibility and amends the modulating brake light bill
to allow for 200-280 flashes per minute versus the current 5 second limit. This essentially allows for motorcyclists to take advantage of what automobiles and trucks are already legal to do and promotes safety—bottom line.

At the General Assembly I was luckily paired up with long time motorcycle lobbyist, Wes Hurst, Director of the VA Bikers Association. I was able to lobby Delegates and Senators with Wes and his family of riders. Wes impressed me with his down to earth approach to lobbying. He appeared
to have had a long time relationship with these people and was welcomed by every oﬃce we went to. He explained every detail to me and even taught me how to politely oppose a proposed bill to the senator carrying it. Needless to say, by the end of the day Wes and I were comfortably a 2 pack punch.
Wes’ down to earth approach was no coincidence. Lobbying for motorcycle rights is a 52 weeks a year job. Getting involved throughout the year and establishing a relationship with your delegate and senator is crucial to being successful when open session comes.

The directors at VCOM have decided to appoint a Northern Virginian liaison to represent the coalition at political events which would help facilitate this exact relationship needed for successful legislation supporting and defending motorcyclists. I am pleased to announce that I will be this representative going forward. Northern Virginia is a very densely populated region of the state with a lot of influence at the General Assembly. I am honored to help represent the coalition in shaping this security.

VCOM is an amazing organization that is led by experienced lobbyists, motorcycle lawyers, and people passionate about riding. Not to mention these guys have some serious shoe game.

Lastly I want to remind everyone that younger riders are the future of our continued successful legislation. If you want to learn more about getting involved with lobbying for motorcycle interests please don’t hesitate to reach out to me.

Even though this was the Virginia lobby day you can make a diﬀerence on a federal level at Bikers Inside the Beltway, May 14th, 2015. Stay tuned for our DC Triumph educational event happening in March to prepare riders with the information needed to take part.

Other bills to watch:

Recognizes and clarifies that sometimes it is appropriate to “stand up” while riding a motorcycle. We’ve seen instances where someone was charged with reckless driving for raising up oﬀ the seat to cross a pothole. This wouldn’t allow someone to “stunt” while going down the road. This safety maneuver is taught in rider courses throughout the country. This may prevent “highway hypnosis” when drivers are in traﬃc.

The math in the SB791 is oﬀ on the motorcycle inspections, we will get clarification as to what its supposed to be from Carrico himself. The funds raised are to be allocated to the State Police for their General Budget. This results in around $100,000,000.00 annually to the State Police at the end of 10 years that the Commandant of State Police has sole discretion over.

Any person driving on a suspended or revoked license, causing death of another will be guilty of a Class 6 felony. Currently it is police discretion at the crash scene and can be written as improper driving. We have tried to push similar legislation in the past without the provision that the oﬀender be suspended. We don’t think this goes far enough, but it certainly moves the ball down the field.

Increases visibility of motorcycles especially at night. Unlike automobiles which are required to have a side marker lights or wrap around headlights/tail lights which are visible from the side, motorcycle lights are many times only visible from the front and rear and do not have the same illumination as automobiles. This makes it more diﬃcult for an automobile driver to see a motorcycle they may be approaching in an adjacent lane. Auxiliary lighting would improve visibility from the side, lessening the chance of a collision caused by an automobile or truck changing lanes into the motorcycle. Several neighboring states (Maryland, North Carolina, Pennsylvania & West Virginia) have adopted similar legislation in an order to increase visibility to motorcycles. There have not been any reported problems associated with this legislation. NHTSA published a report several years ago on the eﬀectiveness of side marker lights on motor vehicles. The report concluded that side marker lights were a cost eﬀective safety device which reduced the number of nighttime angle collisions that occur in the United States. The report found that side marker lamps annually prevent 106,000 accidents, 93,000 nonfatal injuries. HB1700 essentially allows motorcyclists to take advantage of this cost eﬀective safety device. HB1700 also amends the 5 second limit on modulating brake lights, allowing them to modulate at 200-280 flashes per minute. It is not often we are at a stop light for only 5 seconds. This would decrease the possibility of rear-end intersection collisions involving motorcycles.

HB1521 requires all departments over 100 members to use body cams. HB1534 requires State Police to wear body cams. This will protect both the oﬃcer and the public. Public complaints have gone down significantly when departments have started using these. This law would be enforced by Jan 2018.

While in spirit we agree permanent vehicle registrations is attractive, simply because it would be less work; it would subtract approximately $600,000 out of the annual rider training budget. Rider training and education saves lives. Without these funds we would find ourselves begging for money from the General Fund. VDOT would also take a
budget hit which would eﬀect the safety of the roads.

The Virginia Coalition of Motorcyclists is the only state based political action committee comprised of motorcyclists whose mission is to protect motorcyclists by defending and supporting legislation that directly aﬀects motorcyclists on and oﬀ the road as well as educating riders.